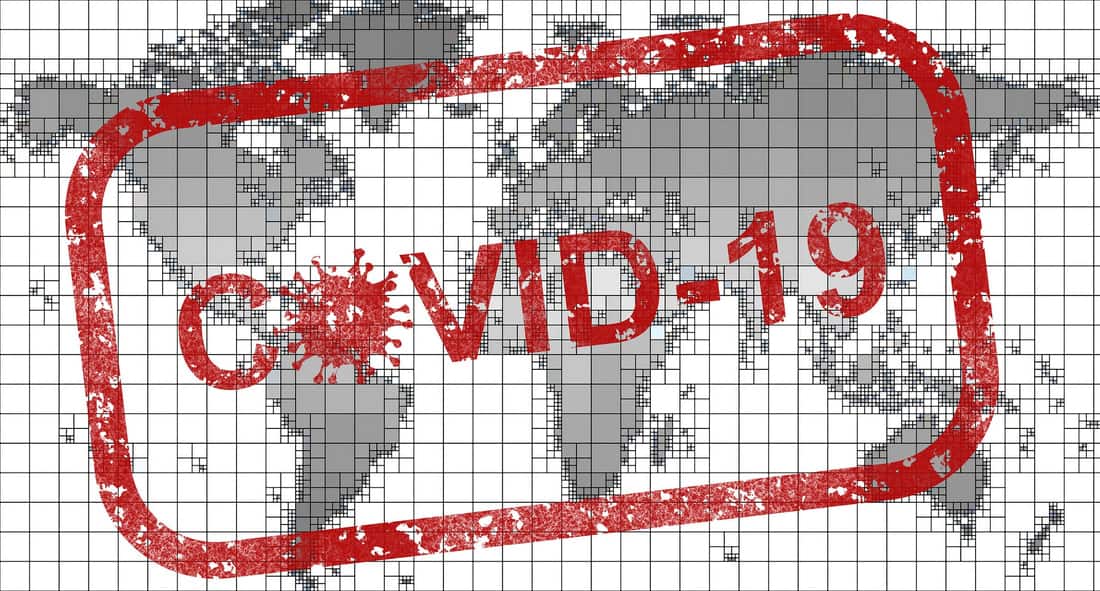 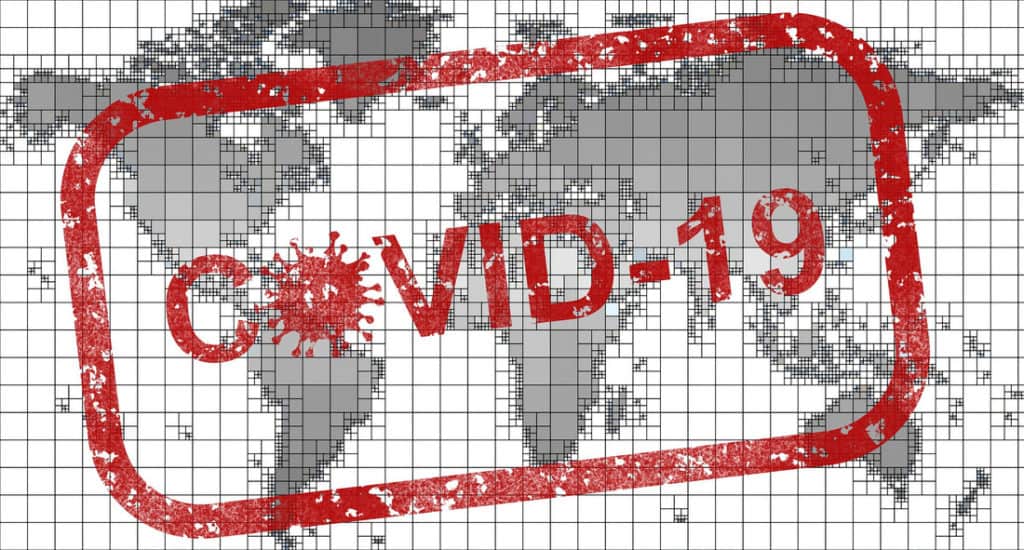 The Covid19 epidemic represents a major shock for the global economy. Early indicators of economic activity point to a contraction well above the 2008-2009 crisis, and on par with the Great Depression. While growth should resume in 2021, the pace will not be enough to offset the ground lost in 2020. In this blog I review the prospects for the next two years, as well as recent developments in international financial markets. I then consider the policy response, and outline some challenges for the medium run.

The IMF forecasts released this week make for somber reading. Figure 1 illustrates the sharp revision of the forecast by showing the difference between the GDP level from the most recent April 2020 forecast and the previous October 2019 forecast (in percent of the GDP level in the earlier forecast), both for 2020 (stripped bars) and 2021 (solid bars). 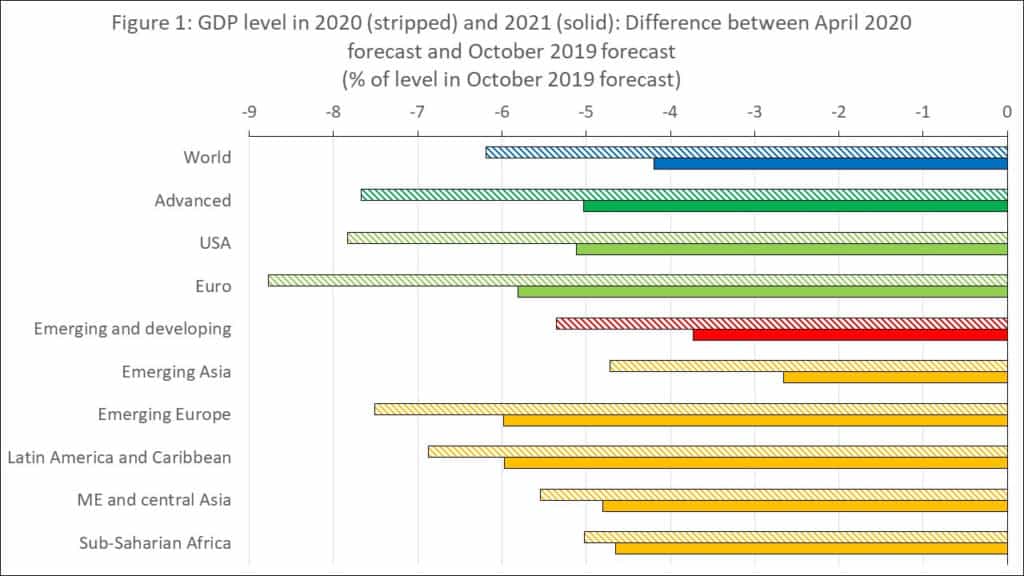 The world economy is expected to contrast massively this year. While growth should resume in 2021, it will be too limited to make up for lost ground and world GDP will still stand 4 percentage points below the level that was expected in the October 2019 forecast (solid blue bar). In addition, the forecasts are characterized by a degree of uncertainty that is larger than usual and could be revised down further. The contraction should be larger in advanced economies (green bars) than in emerging and developing ones (red and orange bars). This offers cold comfort however, as emerging economies will still face a sizable contraction of activity, and this will be persistent as the GDP gap in 2021 (compared to the earlier forecast) won’t be so different from the one for advanced economies. In addition, the situation is quite heterogeneous: while emerging Asia should experience a smaller recession, emerging Europe and Latin America are faced with a sizable contraction and in 2021 are expected to have the worst GDP gaps.

Emerging economies are affected both by the direct domestic impact of the epidemic and the required health measures and by the contraction through international linkages. Figure 2 shows the revisions in the export volumes forecasts, and is constructed in the same way as figure 1. Global trade should experience a contraction even larger than during the global financial crisis. While the impact is larger in advanced economies, it remains sizable in emerging ones. 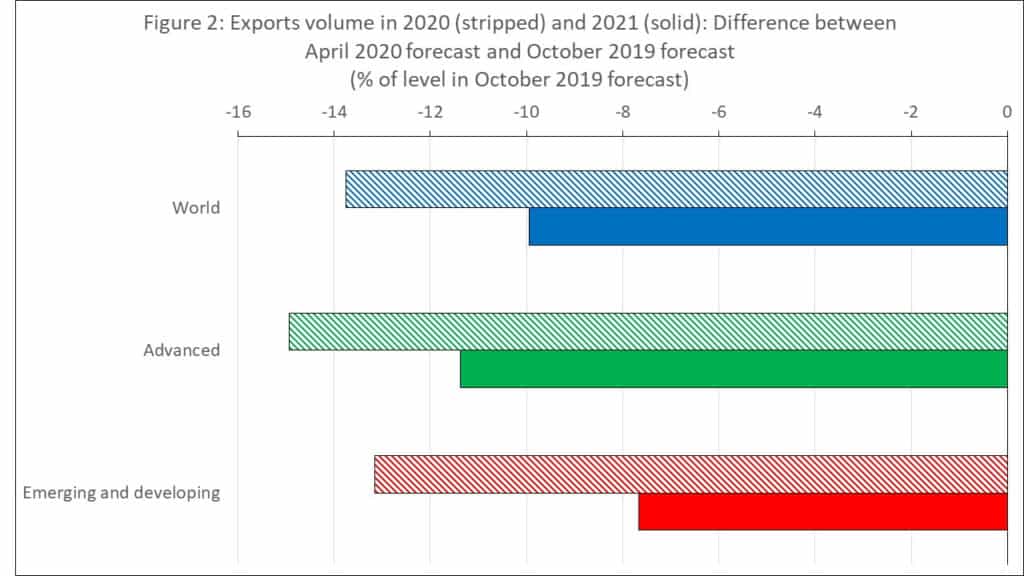 Historically, countries with higher levels of foreign exchange reserves and clearer policy frameworks have been better able to handle the fluctuations in global markets. The question remains whether these factors will be enough in the face of a shock of unprecedented magnitude. In addition, the international spillovers are substantial, which makes domestic policies alone hard-pressed to absorb them. Kohlscheen et al. (2020) estimate that about half the economic contraction in emerging economies reflects the spillovers from recessions in the rest of the world.

Given this uncertainty, and the global nature of the shocks, several measures have been taken by multilateral institutions. These include suspending the scheduled debt repayments for the poorest countries, as well as activating the IMF support for several economies. The IMF has already granted support to several countries through the Rapid Credit Facility and the Rapid Financing Instrument, which can be activated without putting a full-fledged program in place. So far, the support totals 4.5 billion SDR (about $ 6.1 billion). In addition, the IMF put in place a new liquidity line specifically tailored to assist countries coping with the epidemic.

Given the depth and the duration of the recession, it is likely that more help would have to be deployed, possibly stretching the resources of multilateral institutions. A proposal to alleviate the problem is an additional Standard Drawing Rights issuance that would allow for larger IMF support to affected countries. Such an issuance would requires the approval of the IMF largest shareholders, and is thus vulnerable to political considerations.

In addition to its impact over the next two years, the epidemic could lead to persistent changes in the global economy. It has in particular highlighted the risks of relying on only a few countries as sources of goods that are in high demand in a crisis, such as medical supplies. Production capacities can then be stretched when they are most needed, and disruptions in trade can hinder the shipment of goods. The pattern of global trade could then be altered. One possibility is that countries decide to produce a larger share of goods deemed important domestically, which would weigh on trade at the expense of emerging economies. Another possibility is that countries continue to import, but do so from a broader range of sources. While this would be detrimental to countries that had a prominent position as global suppliers before the crisis, it could raise demand from other emerging economies, as short-term production efficiency is traded off against diversification. Another potential change in the medium run is that consumers could perceive some goods and services to be riskier and re-orient their purchases towards other goods. Tourism is a sector that could face a persistent reduction of demand due to such concerns.