Why are REER misalignments important?

The real effective exchange rate (REER from now on) misalignment is an indicator that should highly concern policymakers. It provides information about both the tightening of monetary conditions and the price competitiveness of domestic producers in world markets. Prolonged periods of overvalued REER, meaning an exchange rate, which is above “equilibrium”, pose a threat to economic growth as it implies that domestic prices are too high and domestic producers are not competitive (Bussière et al., 2014; Comunale, 2017). By contrast, a significant and stable undervaluation of REER leads to an excessive vulnerability of the economy to external shocks and the risk of bubbles in the domestic financial market. Another disadvantage of maintaining a undervalued REER for a long time is the lack of incentives for domestic firms to increase their efficiency, as price competitiveness is already high.

There is a set of standard approaches to the estimation of REER misalignment, used in central banks and international financial organizations. Conventional ways of estimating the REER misalignments are the Fundamental Equilibrium Exchange Rate (FEER, see Williamson, 1994), the Natural Equilibrium Exchange Rate (NATREX, see Stein, 1994) ), and Behavioral Equilibrium Exchange (BEER, see Clark and MacDonald, 1998, 2004). FEER approach requires estimation of the difference between the long-run position (norm) of the current account and the cyclically adjusted (underlying) current account. Respectively, REER misalignment is a percentage depreciation/appreciation needed to close this current account gap. In the case of the NATREX approach, the conditions of the FEER approach are incremented by the requirement that, in the long run, the REER meets the equilibrium value of capital accumulation and the external debt of the economy.

The most popular and easiest to apply is the BEER approach, which involves the construction of a regression that directly estimates the long-term relationships between REER and fundamentals. The availability of data and generally uncomplicated econometrics make the BEER approach popular in studies of emerging markets. Essentially the BEER approach is a two-stage procedure. In the first stage, an analyst estimates a regression with the long-run relationship between the REER and economic fundamentals. In the second stage, the estimated regression coefficients of the first stage are applied to the equilibrium values of the economic fundamentals derived by the Hodrick-Prescott filter or by taking five-year projections of the corresponding variables.

An example of REER misalignment estimation is found in Vdovychenko (2021) where the BEER was assessed for Ukraine. The list of fundamentals consists of the net foreign assets position (NFA), trade openness of the economy, commodities terms of trade index, the indicator of productivity differential relative to trading partners, and fiscal policy tightness. Figure 1 demonstrates the results of the estimation, where the blue line is the REER itself and the black line is the average of the trends estimated basing on the different specifications of respective regressions. Misalignments in percents are the deviations of REER from the trend (black line).

BEER approach gives a good opportunity to see the contributions of economic fundamentals into the dynamics of the REER trend (Figure 2). For the recent period, the appreciation of the equilibrium REER is mainly driven by the fast NFA growth. The tighter fiscal policy of recent years restrained inflation and, respectively, the appreciation of the REER. The negative contribution of the relative productivity is gradually declining after the structural shock of 2014. The positive dynamics in commodity terms of trade in recent years have led to a shift in the equilibrium REER towards appreciation, although not to a large extent. 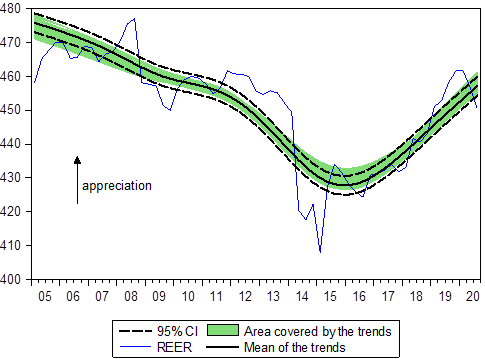 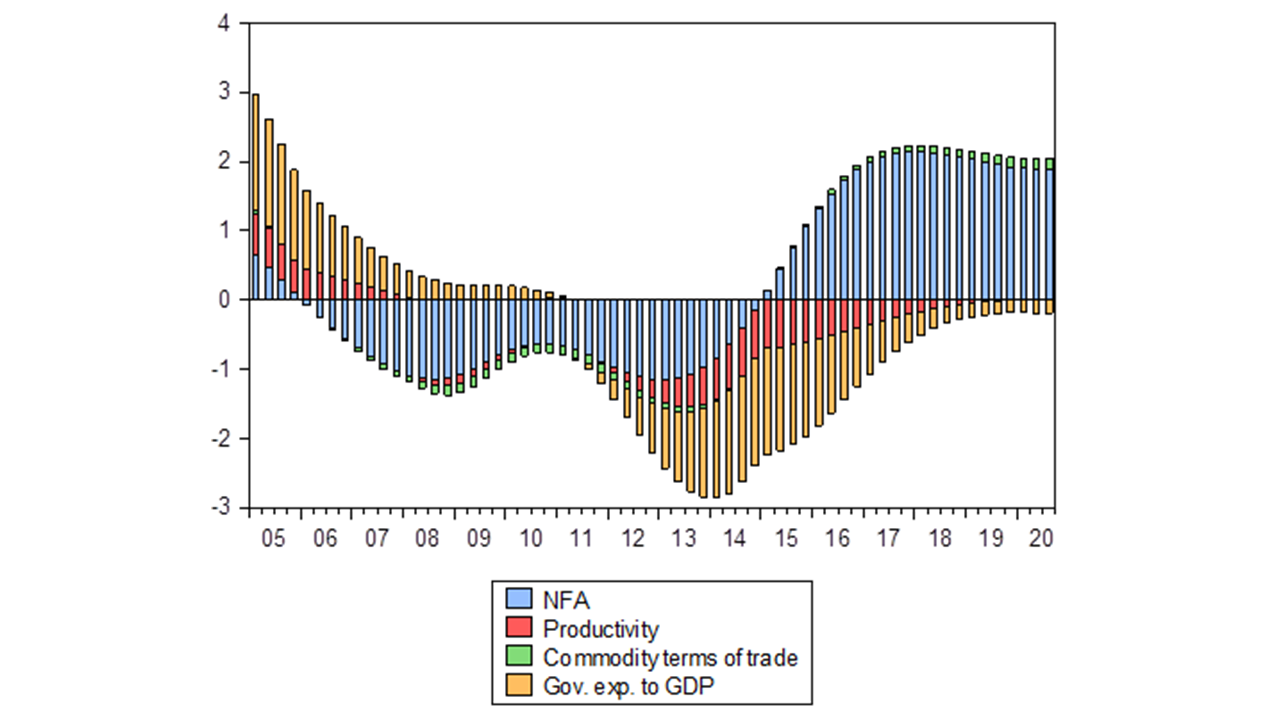 Figure 2. Average contributions of fundamentals into changes of REER trend

The presented estimates of the equilibrium REER indicate that even taking into account the model uncertainty during 2019, the real exchange rate was somewhat overvalued (Figure 1). However, the REER gap closed in the second half of 2020. Also noteworthy is the fact that the obtained results identify two more periods of significant overvaluation of REER. The first is during 2008 (boom in commodity markets, which opened large terms of trade gap) and the second between 2011 and 2013 (the period of fixed nominal exchange rate regime). Interestingly, after the periods of overvaluation of REER, there were quite rapid exchange rate adjustments. Thus, in 2009-2010 it was connected with the Great Recession, and in 2014-2015 with the economic crisis in Ukraine caused by the annexation of Crimea by Russia and military conflict in the eastern part of the country. Besides identification of misalignments periods, the analysis distinctively shows that after 2015, when the inflation targeting regime was introduced in Ukraine the volatility of REER around the trend has reduced significantly.

Monetary policy cannot deal with the forces driving the REER trend as they are exogenously given to the economy or depend on the policies of other authorities. However, REER misalignments estimated by BEER or another approach tell a lot about the tightness of monetary conditions, prospects of inflation developments, GDP growth, and nominal exchange rate movements. Preventing large and persistent REER misalignments helps to avoid negative processes in an economy, mentioned above. The exchange rate regime and monetary policy instruments, interest rate first, can be helpful in this by affecting inflation and nominal exchange rate changes.

[1] The bars in Figure 2 sum up to the first differences of the mean of estimated REER trends (black line on Figure 1).