Regular medium-term macroeconomic forecasts and monetary policy recommendations at the National Bank of Ukraine are mostly based on a Quarterly Projection Model, which is a semi-structural, forward-looking New-Keynesian model of a small open economy. Owing to the fact that the main role of the Quarterly Projection Model is to produce story-telling and to incorporate some expert judgments, the issue of the forecasts’ accuracy may fade into the background. For that reason, it is worth having an additional empirical model producing more accurate forecasts.

A Bayesian Vector Autoregression (BVAR) model for forecasting inflation in Ukraine was developed. The forecasting performance of the model was examined and the accuracy of the forecasts was compared against the forecasts of the Quarterly Projection Model and official NBU forecasts. 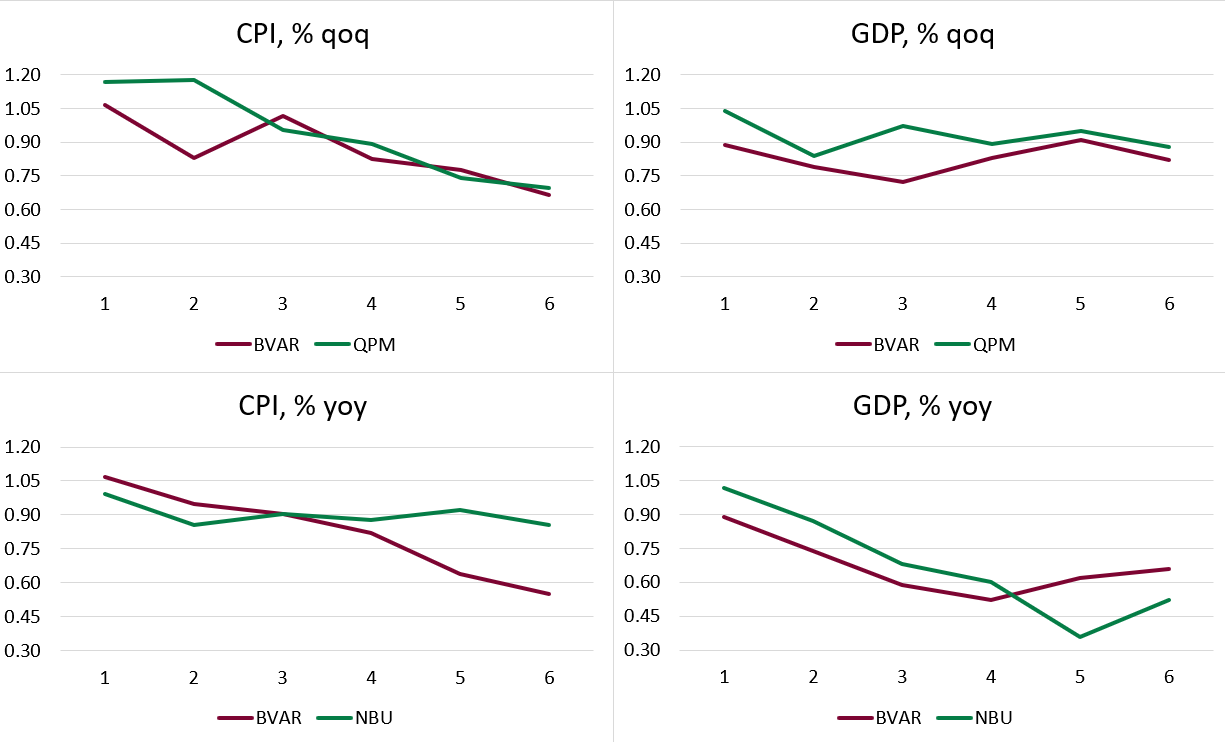 A Bayesian approach to estimation was chosen given that Ukrainian data is short and dimensionality problems may arise with the large number of parameters present in the model. The imposition of priors not only solves the dimensionality problem but supplements the information contained in the data with the personal judgments contained in the prior. Specifically, a BVAR model with an informative steady- state prior was employed, because this type of priors is widely used for inflation forecasting in countries which adopted an inflation targeting regime, as it explicitly uses information about the inflation target and other equilibrium values. Villani (2009) was the first who imposed prior directly on the steady state of the model. BVAR with steady-state prior was also employed by Iversen et al. (2016), Brázdik and Franta (2017), Beechey and Österholm (2010).

It should be noted that due to the very short period used for forecasting evaluation exercise, the findings of the research should be treated with caution and might be subject to change as the data accumulates.

To sum up, BVAR models with steady-state prior can be viewed as an effective tool to improve the forecasting accuracy of standard models as they explicitly use information about the inflation target and other equilibrium values.